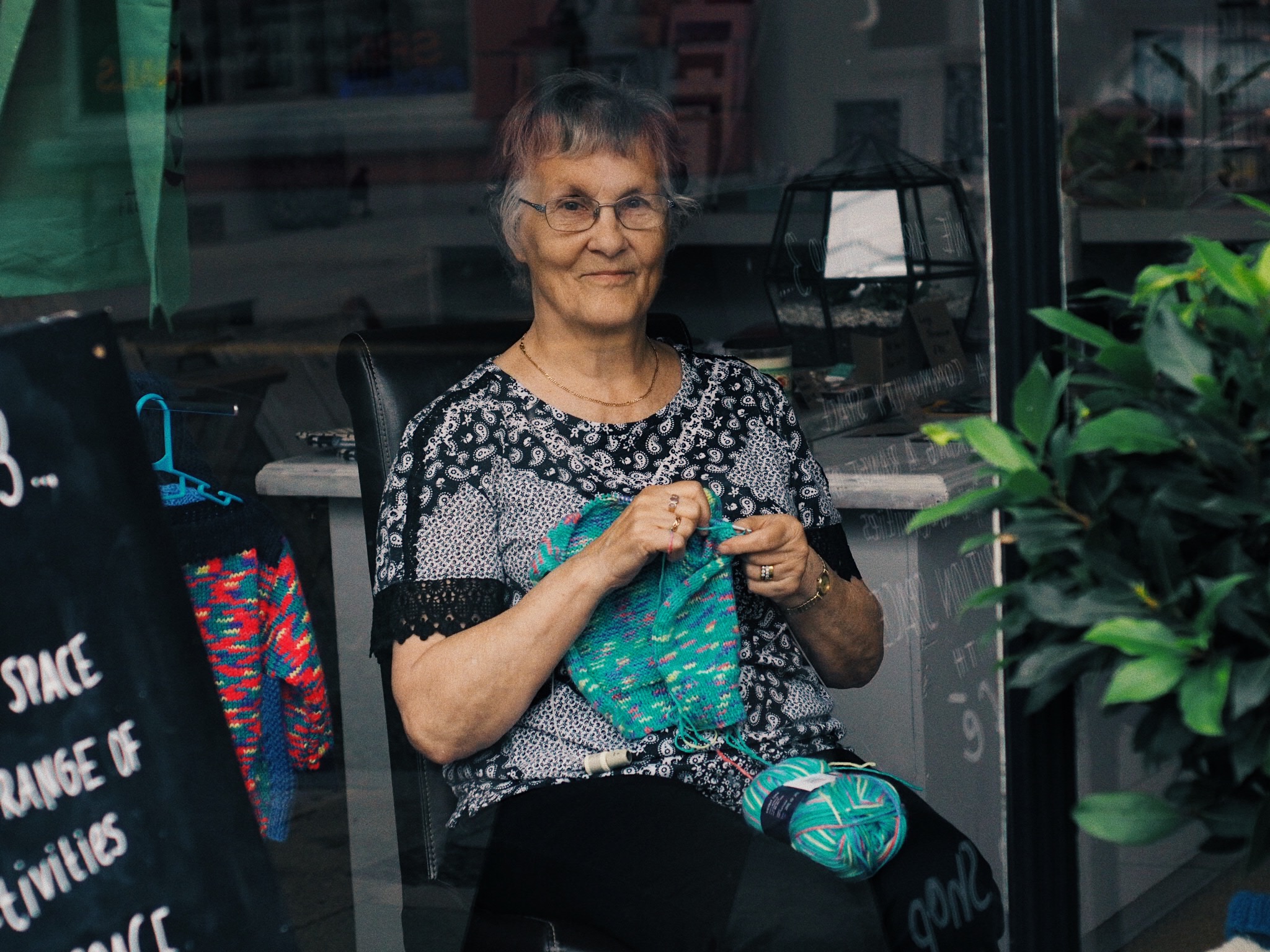 Back in my harbour side hometown of Cardigan, West Wales, a decade since I moved away from farm life to study, an old school friend showed me what’s changed. You could say Cardigan has indeed been gentrified. The Fforest pizza tipi overlooking the river Teifi, buzzing with young, trendy staff, great taste decor and blackberry cocktails with straws made from actual straw (they had to check we weren’t celiac), a town and it’s castle full of live music and events, made me feel as though I’d landed in a picturesque filmset.

Onward to what used to be mine and my mother’s favourite dated wallpapered cheese toasty spot, Brethyn Cartref, now a creative studio space and cafe called Stiwdio 3, where you can attend all sorts of art workshops from marble paper making to pom pom fruit garland crafting. In the window sat an old lady, gazing contently across the street at holiday makers and locals passing by as she knitted ferociously.

‘She’s lush isn’t she’, my friend said. Lush being the number one positive adjective used in Wales, to which I repeated the word to remind myself how familier it used to feel on my tongue. ‘Lush’.

She ushered us over so I asked her what she was making.

‘I’m knitting jumpers for child refugees’ she said, her hands in constant motion as she began to tell me her story.

Eileen Johnson, originally from North Kent, had a bomb land in her front garden when she was a baby and her mum found her atop a heap of soil, blown out of her cot, windows shattered, with barely a scratch. She spent her childhood retreating to the bomb shelter across the road when the sirens sounded, often hiding away for endless hours at a time. Her Scottish mother taught her to knit to pass the time when she was 3 years old and Eileen used to go to school with wool peeping out of her bag – always something to do and create. ‘I take it for granted, knowing how to knit. I want to teach people and encourage children to give it a try’.

She has an ambitious target, with the help from other knitters – newbies and pros – to make 2,020 jumpers for refugees in time for winter, 2020. She’s not sure it’s possible, but she wants to do good with all of the wool that sits unused in peoples homes, whilst also teaching beginners the joys of knitting along the way.

‘Anyone who’s ever knitted has a cupboard or box full of wool somewhere they’re not using. We should put it to use for those who really need it’.

Around the world, 70.8 million people have been forcibly displaced due to war. That’s the most since WWII, according to the U.N. Refugee Agency (UNHCR). Most people remain displaced within their home countries, but about 25.9 million people worldwide have fled to other countries as refugees. Over half of the worlds refugees are children.

Each jumper, to me, symbolised a cocooning hug of warmth, a small gesture that could go a long way, when we often feel so hopeless with how to help.

We seem to feel so far removed from all of the suffering caused by war, yet here is a woman who has survived being bombed in WWII in our country of seemingly resilient standing, who grew up familier with what resourcefulness and fear actually entails, with a glimmer of understanding of what refugees are going through today, sidelined and ignored, their futures constantly under threat. ‘It’s only jumpers, it’s only knitting’, but from one war to another, there’s love and hope being created between two needles.

I truly hope Eileen makes an impact in Cardigan, in Wales and in countries of war where families need all the help they can get. Wouldn’t it be wonderful if her story reached a broader audience and people donated their creations from all over the U.K. and beyond? Uniting in creating, connecting and learning towards a future where we can look out for one another beyond sighing at the news. Perhaps you’ll read this and pass it on, maybe even consider giving knitting a go, knowing that your knotted wool will bring warmth, maybe even a glimmer of hope and joy amongst the chaos, where it’s wholeheartedly needed.

From our comfortable standpoint, sipping through straw, I hope we do so, so much more.

Let's explore together
Discover the medicine of your body and voice